A friend of mine went strawberry picking the other day and was sweet enough to share some of their bounty with me. I also happened to have a free quart of organic buttermilk in my fridge that had passed its sell-by date (by a day) and couldn't be sold. So, I whipped up some muffins. I need to figure out what to do with the rest of the buttermilk, but for now, here's the recipe:

Grease a muffin pan and preheat the oven to 375 F.

Combine all dry ingredients and mix with a whisk. In a separate bowl, mix all the wet ingredients until very well combined. Pour the wet mix into the dry mix and fold -with a rubber spatula or wooden spoon- until almost all the flour has been incorporated. Add the fruit and gently fold until JUST incorporated. DO NOT OVERMIX. That is the leading cause of death of all homemade muffins. Your mix should JUST get to the point where all the flour is damp, but the batter is still plenty lumpy.

Scoop mix into muffin pan. This will make 12 regular-sized muffins. Bake for 18 minutes. They will be done when the top of the muffin is springy to a flat hand.

Let cool, then enjoy! Store in an air-tight container or bag at room temp.
Posted by Rose at 7:04 AM No comments: 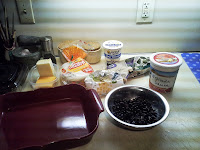 I learned to make enchiladas at my friend Molly's house once. She made two huge trays for her birthday party. They were ridiculously delicious, and I had no idea how simple they were to make. I'm by no means claiming this dish to be "authentic" Mexican cuisine. This is authentic Rose cuisine, a fusion of things that taste with memories that feel good.

I think this is the recipe I used for the sauce. I think I doubled it and put half in the freezer, because that's were I got this particular batch of sauce. I've also used jarred salsa verde for enchiladas, which is delicious. 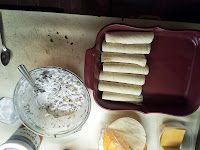 So, here's what I do:
In a bowl, combine 2 cups cooked black beans, 1 cup sweet corn (frozen corn, defrosted), and 1 package of frozen chopped spinach, defrosted and drained, with 1 cup sour cream, 1 teaspoon cumin, 1 teaspoon granulated garlic, and some salt and pepper. Mix it all up nice. This is the filling.


You need a nice rectangular baking dish. I like ceramic. I use the little corn tortillas (MUST be corn). Scoop about 1/3 C of the filling into each tortilla, roll it gently, and set it in the baking dish, rolled side down. Fill your dish thus. Cover with a quart of enchilada sauce. Top with shredded cheese- I use a blend of Monterey Jack and cheddar. Bake at 350 F for about 45 minutes to an hour, until the cheese is all melty and starts to brown. Let cool for several minutes before eating.
That's it! Cheers!
Posted by Rose at 1:50 PM No comments:

I made these cookies today to bring to a meeting this evening. I forgot them at home. More for me!

Mix coconut oil and sugar together until smooth. Add remaining ingredients and mix until smooth. Press into the bottom of an 8x8 or 9x9 baking dish (the bigger the pan, the thinner the cookie, the shorter the baking time!) and make sure it's as even as possible. Bake at 350 F for about 15 mintues or until golden brown. Remove from oven and let rest for 5 minutes, then cut into bars or squares. Let cool completely before removing from pan and eating.

Because there is no water in coconut oil, these shortbread cookies are SHORT. And freaking amazing. And incredibly easy and quick to make.
Posted by Rose at 7:57 PM No comments:

Kentucky Blondies
Adapted from a recipe by the brilliant Thomas McCurdy

Cream together the butter and sugars until incorporated, but the butter should still be chunky. Add eggs and vanilla, mix until combined, but with the butter still chunky. Mix in the dry ingredients and the white chocolate, then the bourbon. The only way you can fuck this recipe up is by over-mixing.
Line a 9"x13" baking pan with parchment paper and grease it. Pour the batter into the pan, lightly smush the batter out to the edges of the pan. This isn't too important, as it will spread when baking.
Bake in a 325 degree oven for 15 minutes, then turn the pan and bake for another 15 minutes. Allow to cool in pan for 5-10 minutes, then cut into squares. Gently remove from pan and let cool before eating.
Posted by Rose at 5:19 AM No comments: 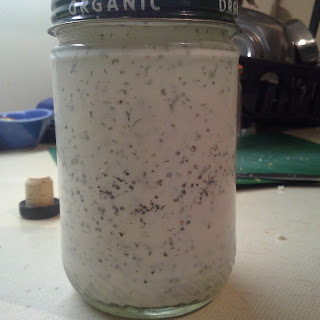 Put all the ingredients in a jar, shake like crazy. Shake shake shake shake shake! Eat within 5 or 7 days, or operate common sense about consuming dairy products that have been in your fridge over a week. Shake some more.

*Omit the water if you want a thicker dressing, like dip. With the water it's the perfect consistency for drizzling over green salad.
Posted by Rose at 6:31 PM No comments: 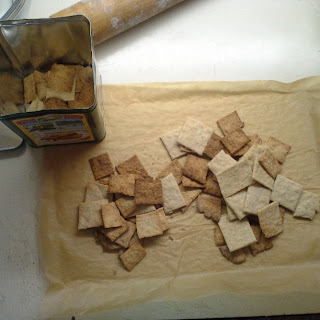 Combine flours, sugar, salt, dill and garlic (you can use any seasonings you like, really, just don't use too much) in large mixing bowl, giving it a quick stir with a whisk. Cut the butter in with a pastry cutter or forks until the butter is in pea-sized bits. Add water and mix/knead until all flour is incorporated, but be careful not to over-knead.

Divide the dough into three equal sized pieces. Cut 3 pieces of parchment about the size of your cookie sheet or jelly roll pan. One piece at a time, roll the dough out on the lightly-floured parchment paper, flouring the dough and rolling pin as necessary. Roll outward from the center of the dough, with the goal that it will fit just inside the parchment paper. It should be no thicker than 1/8". Gently lift the parchment paper, with the rolled dough, onto your baking pan. Cut into squares or whatever shape you like and trim the rough edges as you like.

Bake for 8-12 minutes, until dark golden brown. Baking times will vary by oven. Allow to cool and store in an airtight container.

This will yield several dozen crackers, or, in my house, enough to last 6 hours ;-)

Ok, I'm just being dramatic, obviously I didn't KILL the guy. But, my three year old son has been saying for the last 18 months that he's afraid of Santa. He doesn't want to ride the Polar Express to go meet him (can you blame him?), he doesn't want to go to the mall to meet him, he doesn't want him coming to our house. Go figure, my genius kid has already figured out that this character defies the laws of reality and therefor is afraid of him. So, last night, I told him he had nothing to be scared of, because Santa is not real.
IN MY DEFENSE, I explained that Santa only lives in stories, and that he's really a wonderful thing, because he reminds us of the power and magic of giving. I told him that Christmas is a holiday that began because many people believe it is the day when God gave a wonderful gift of hope to the world. I told him that we celebrate Christmas because we believe that hope and generosity are really important, and so we give each other gifts. I also told him not to tell any of his friends that Santa isn't real, because they might not be afraid of Santa, and they might like to believe that Santa is real. I told him for about the millionth time that every family has different stories and rules and traditions, and we should always respect them. About this point in the conversation, he changed the subject and began explaining to me what trucks do.
Here's the thing: my husband and I work really hard, and I don't want some imaginary fat man getting the credit for the gifts we give to each other. How is that helpful? When he grows up, our little guy is going to want to know why his friends got more gifts than he did, and I want him to know the truth. In our family, the holiday is about GIVING, not receiving. Also, I'd rather spend my hard-earned money on a few fantastic dinner parties than a mountain of toys for a child who really doesn't need them.
So, my husband is kind of mad at me, but he'll get over it. We're still a young family and we're still trying to figure out our own traditions. We have yet to celebrate Christmas in our own home, and so we've just been doing what the family-at-large does. But Rowan is old enough now that he's starting figure stuff out, and I want to control the information he gets. It's absolutely my right as his mom. So, I'm trying to help him see Santa as a non-scary story character who is vital to happenings of the winter holiday, but not the whole story. We will write our own version, like every family does, and it's really important to me that the story shores up with our beliefs. Christmas isn't about gifts, it's about giving; it's not about a strange fat man in a red suit who defies physical law, it's about family and friends who we can touch and feel and hug and sing with and laugh with and spend months thinking about the perfect gift to give, hopefully making that gift, and knowing "They will see how much I love them when they see how much I thought about this".
Rest in peace, Santa. I'll take it from here.
Posted by Rose at 6:38 AM No comments: